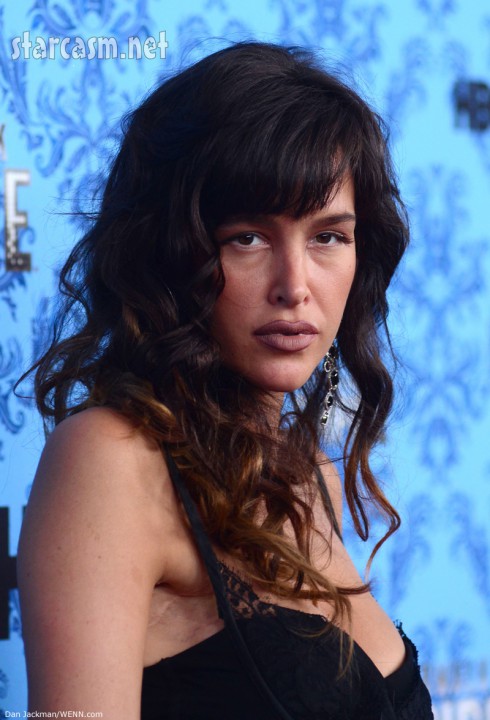 UPDATE – Here’s what Paz has been up to since this article was written: She’s been falling-down drunk and boob-flashing at almost every prominent Hollywood party she’s attended, and she was arrested and charged for attacking reality starlet Samantha Swerta while drunk and flashing a boob.

Paz De La Huerta is about to get a lot more famous. The 26-year-old actress and model has been in the biz for 12 years, but she’s finally going to get the attention craves as Steve Buscemi’s character’s girlfriend in the much anticipated HBO series Boardwalk Empire. The public doesn’t know much about Paz yet except she likes to pose and show off her snake tattoo. But there’s apparently more trouble brewing underneath this well-read downtown princess, and we can probably expect her behavior to erupt once the public squarely turns their attention to her. Her beauty is less doll-like and more rawly animal than shock-starlets of the past few years, like Megan Fox (who was merely pretending to be shocking target=”-blank”). Evidence suggests that Paz may actually be as eccentric, sex-obsessed, and generally “wacky” as she wants us to believe. It may not be an act that it’s all an act. In the New York Magazine profile of her written by a one-time fling Jay Bulger, she’s portrayed as a more exhibitionist Holly Golightly character. A woman who thinks she’s the reincarnation of Marilyn Monroe and is obsessed with being naked, having sex, being accepted, and shocking people in public; she’s also a girl who begs her way through life. She is described as being “perpetually broke” and spending money the minute it touches her hands. If she doesn’t have any cash, she begs everyone: the journalist, shop owners, her production studio for freebies. At some point she even noted a homeless person (when she was a teen she actually brought a homeless family home to live with her family for two years) and remarked that not matter how much money a person had, a few bad decisions could land you on the street. Bulger then asked her if she knew how to handle big money if she had it (she’s on the verge), and she said she’s buy a brownstone or go to Graceland.

Paz is perpetually broke. Always in search of a bargain, she will sweet-talk the juice-blender at the health-food store into giving her a free sample, whisper into the ear of the maître d’ at Gusto for a plate of free ravioli, and compliment the Mexican worker at Ray’s Pizza on his smile, winning a slice in return. When she has money, she loses it on clothes or lampshades or curtains.

In Bulger’s article Paz, who briefly  Jack Nicholson in 2006 when she was 20, comes off as a spoiled, privileged, educated girl (she knows her film and literature) with artsy taste who’s obsessed with her own sex appeal and wild child attitude, but is incredibly insecure and needy. Fame could be exactly the thing that helps her reel completely out of control. Forget sex tapes, expect sex on the red carpet.

Here’s a video of Paz on Jay Bulger’s internet who “Driving with Jay” filmed in 2009:

Her fling with Nicholson didn’t last, but she did date Stone Temple Pilots rocker Scott Weiland for two years, and claims to be still getting over that heartbreak. She’s also been connected to Orlando Bloom, but claims to be “f**king a construction worke” in the May NY Mag article.

Maybe it’s the people in her life that are helping Paz spin this fantasy of herself. Her mother Judith Bruce, a women’s issues lawyer for Third World countries, describes her daughter in grandiose statements: “Paz is Genghis Khan meets Marie Antoinette. She is tempestuous and provocative. She wants a big life, and like all great people, it’s going to take a little experimentation before she can get all of the keys together.”

A psychic tells Paz exactly what she wants to hear: “You were definitely Marilyn Monroe in a past life.”

She was born María de la Paz Elizabeth Sofía Adriana de la Huerta in New York’s SoHo district to Judith Bruce and Spanish Duke Iñigo de la Huerta. They split when she was 12, around the time she turned to a punk rock identity and landed a role in The Cider House Rules. She’s gotten a little paparazzi attention before when

In 2011 she won a Screen Actor’s Guild Award for her work in HBO’s Boardwalk Empire>.