Offered his second “Get out of jail almost free” card, Amy Winehouse’s husband Blake Fielder-Civil has decided to instead fight for his right to party and serve out the rest of his 27-month prison sentence. 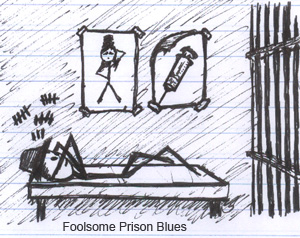 The first early release offer was in exchange for Blake’s agreement to move in with his mother under house arrest. This time his reduced sentence would only cost him a trip to rehab, but he said, “No, no no!”

Exactly like Nelson Mandela, who was 22 years into what would eventually be a 27-year sentence when he refused to gain his release by renouncing armed struggle, Blake has chosen the “high” road. He is taking a stand for all scrawny, heroine addicted, abusive punks who just want to get high and date self-destructive, drug addicted music stars in complete non-anonymity, like Courtney Love.

This is sure to be just the first step in a Fielder-Civil Rights Movement among his people and their enablers. We smell a Nobel Peace Prize!

In other Amy Winehouse news, the singer owes a designer $50,000 for some silk gowns she left lying around after vomiting on them. (We wonder where Linda Tripp is during all this) Only $50,000?!?! Certainly there is a market on eBay for pukey dresses. Posh Spice probably pays that much for the ones she wears.