It looks as though we might have a new contender for brassiest celebrity super-ego! We’re not even sure if Kanye was aware there was an election! Here’s the latest quote from modest mouth’s AP interview:

I realize that my place and position in history is that I will go down as the voice of this generation, of this decade, I will be the loudest voice. It’s me settling into that position of just really accepting that it’s one thing to say you want to do it and it’s another thing to really end up being like Michael Jordan. There were people who had the potential to do it but they went on vacation, so when Justin (Timberlake) went on vacation I made albums. And it just came out to be that.

Heh heh! When’s the Kanye West Cirque de Soleil show gonna open? Justin Timberlake?!?! Alright, we’ll run with you Kanye. Here’s is our rendering of what the greatest musical pairing of all time would have looked like if Justin hadn’t taken time off: 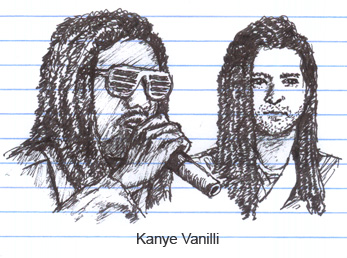 (Author’s Note: I wanted to draw Kanye and JustTim chest bumping Milli Vanilli style, but I couldn’t get their faces in there. Also, I was going to caption the image “Kanye Vanilla” but I thought that might have been stretching it just far enough that some people might not get it) (This is like the “Special Director’s Cut” version of this post! And just think – you’re getting all these bonus features at no extra cost!)

Now everyone can have a Kimye wedding with Kim Kardashian: Hollywood