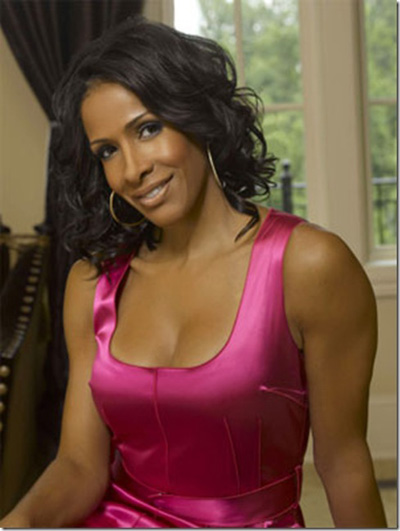 UPDATE: As of 2010, Sheree put her She by Sheree fashion line on hold!

Although the website for She by Sheree is still “coming soon,” Sheree did debut a fashion line this spring at Atlanta’s W Hotel. There were even clothes there! You can view photos of the garments at Young, Black and Fabulous. and it looks like she finally found someone who knew how to work a needle and thread. Yes, the clothes aren’t awful, but they aren’t stunning either. You have to have vision to create remarkable fashion, not just pick out sketches you like that you paid someone else to draw.

When Sheree was pushing her She by Sheree on the show she claimed it would debut at fashion week, even though she can’t draw, sew, or even hire competent people to put together her line. Sheree never made it to fashion week in NYC and apparently it was because of Barack and Michelle Obama:

No, I’m not showing at Fashion Week. My line will be in stores in the fall and my Web site, ShereeWhitfield.com, is up. 2009 is a hot year. Barack is going into office and Michelle Obama is by his side. She’s awesome and is a great example. 2009 is Sheree’s year, girl. Let my haters be my motivators.

I’m not sure exactly what Sheree is trying to say here, and I doubt she does either. Unlike Gretchen, or even Kim, Sheree’s not so smooth with her BS. She spoons in out in a jerky, nervous, staccato that indicates even she’s not buying the words coming of her mouth.

Hoever, during the Real Housewives of Atlanta Season 2 premier Sheree did come off as a lot more likable than she was during the first season. This might be caused by a notable decline of grandiose statements, a twinge of humility about being forced to move out of her former fabulous dwellings, and, last but not least, being the victim of the worst customer service ever caught on camera.

Though Sheree has gotten a tad more likable, I’m still not digging her fake designer persona. As an interesting twist, Sheree’s cast-mate, Lisa Wu Hartwell also had a fashion line debut this year, called Closet Freak. From the looks of it, Lisa Wu’s line wouldn’t exactly make the cut on Project Runway either, but it’s got a little more life to it.

These girls should leave fashion design to fashion designers and stop taking credit for other people’s work. If they really want to be involved in fashion, they should invest in a promising young designer’s company and help them get on their feet.

Click below to listen to a Sheree’s favorite song, “Hi Haters” by Belly: