In what promises to be just the first episode of many in an untelevised reality show titled the “A-twin-tice,” an insider tells In Touch that former womb-mates Mary-Kate and Ashley Olsen have had a corporate clash. 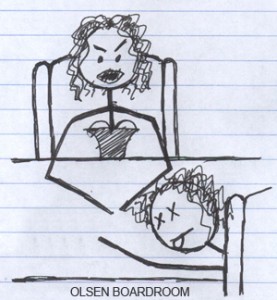 The insider (BFF? Bob Saget? The twins’ nanny?) reports that Ashley is the more dedicated businesswoman of the two, and has “asked her sister to step back from her current responsibilities until she has her personal life together.”

Don’t take that to mean Ashley has completed her transformation from chump to Trump, though. Instead of “You’re fired!” it was “You’re demoted!” to Elizabeth and James, which is the lower end division of the Olsen fashion empire. The move distances MK from The Row, which is the more upscale, couture line.

The Row line was originally Mary-Kate’s idea, but like many of the great creative geniuses over the course of human history, MK is tragically sacrificing her God-given talents for a life of partying and text messaging her BFFs. Stay tuned to see if Ashley can divert MK from her self-destructive path and prevent another tragedy like Hank Williams Sr. and Jack Kerouac.