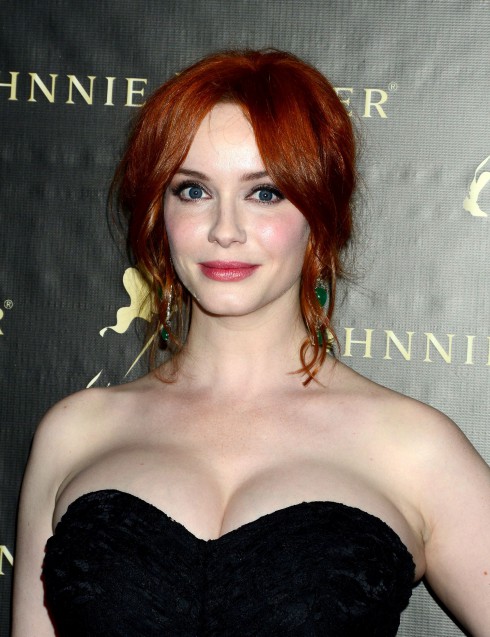 Here’s a little known fact: women CAN possess large boobs without having a boob job. Since 95% of my job requires me to look at fake boobs all day, and being the possessor of natural D-cup breasts myself, I think I’ve become quite adept at spotting real breasts from inflated ones.

According to my expert opinion Christina Hendricks has 38-DD natural breasts, (and so does Lindsay Lohan, from what I can tell.) The thing about natural big breasts is that, even when pushed up with a corset and def-con bra, the cleavage lines still have a softness to them, not chiseled definition that you’ll on Kim Zolciak’s chest. They’ll also creep into the armpit, which is what’s happening in the above photo. Click here for a bunch of side-by-side photos of Christina’s cleavage next to fake cleavage.

There’s also this photo of the Mad Men beauty in a bathing suit that is almost incontrovertible proof that those darlins are natural. Christina has confirmed what my eyes are telling me many times. Here’s a quote from The Daily Mail:

“It’s so bizarre that people are constantly asking if my breasts are real or fake. They’re so obviously real that anyone who’s ever seen or touched a breast would know.”

Another thing to note about Christina’s breasts is that they haven’t always been that big. People often use this as evidence of plastic surgery, but they are forgetting one important point: Christina heself didn’t used to be this big. Not that she’s big, but in the Hollywood world of negative-0 sized stars, Christina now has a size more in line with the average American woman. Christina has told the press that during Awards season, she has difficulty finding designers willing to dress her because she doesn’t fit into the size 0-4 sample sizes.

She also tells sumptuous tales about how she gained the weight that added to her hourglass figure. She told Health (via Hollywood Dame) in July 2010:

“Back when I was modeling, the first time I went to Italy I was having cappuccinos every day, and I gained 15 pounds. And I felt gorgeous! I would take my clothes off in front of the mirror and be like, Oh, I look like a woman. And I felt beautiful, and I never tried to lose it, ’cause I loved it.”

It’s great to see a voluptuous sex symbol with such a positive attitude! Americans are having an obesity epidemic, yet we idolize skeletal bodies. Let’s find a healthy medium, people!

What do you think, real or fake? Here’s a closeup of her cleavage to help you decide:

Jillian Michaels had a nose job?