Two Amy Winehouse Updates in one week! Running with the notion of celebrities being “stars,” we feel like giddy astronomers that get to actually watch a super nova collapse in on itself over a period of a couple years! Sadly, it has to end soon – we think Amy is already close to becoming pure dark matter. That being said, check out this solar flare from Winehouse Borealis:

A French reporter was able to interview Amy Winehouse through her doorbell intercom, and captured it all on video. A relatively coherent Amy answers questions about Blake, France, and her next album. She might want to look into this method of appearing before the public because it’s the best Amy’s looked in a loooooong time! Plus, no punching! 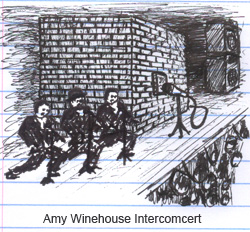 Was Amy Winehouse bulimic? Her brother claims that’s what killed her