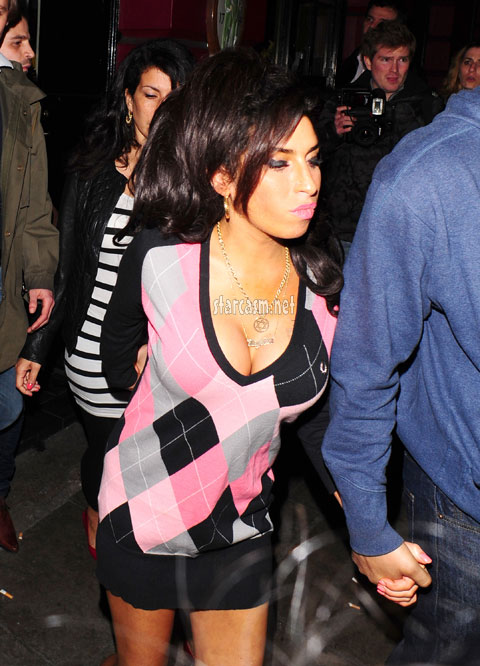 Amy Winehouse’s spokesperson has confirmed she’s back in rehab again. The 27-year-old singer has been pretty quiet lately. She’s no longer straggling around the streets of London looking drunk and high every single day. There was a lot of talk about her finishing the highly anticipated follow-up album to her smash-hit critical darling Back to Black.

That 2006 album was perfection, but unfortunately Amy descended into a sad spiral of public self-destruction, landing herself in the hospital for multiple overdoses and problems. She’s since appeared to have gotten herself together, but this morning she checked back into rehab at Londan’s Priory rehab center. According to the Daily Mail before she checked in, though, she stopped at a store and downed a mini bottle of Smirnoff.

Amy’s dad Mitch Winehouse was reportedly concerned about her drinking again, and suggested that she check into the center to get back on track. Her rep says she’s also sorting things out so she’ll be ready to go on a European tour this summer:

“Amy Winehouse has embarked on a treatment programme at the Priory Clinic.

She wants to be ready for performances in Europe this summer and decided to seek an assessment. She will remain at the Priory on doctors’ advice.”

But the rep denied that Amy recently burst in on a hair salon and threw up in their toilet. According to the rep, she politely asked to use their loo, did so discretely, and left.

Hopefully Amy does get it together and release that new album. We’ve been waiting with baited breath for five years now.

What will Lindsay Lohan be treated for in rehab?