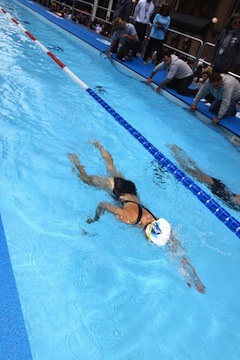 Amy Van Dyken, six-time Olympic gold medalist, is in stable condition in a Scottsdale, Arizona hospital after an accident left her paralyzed from the waist down.

Van Dyken, who in 1996 became the first American woman to win four gold medals at one Olympic Games, was injured when “the ATV that [she] was driving hit a curb in a restaurant parking lot and sent her over a drop-off between 5 to 7 feet.”

The accident occurred on Friday, and, according to a statement from her husband, former Denver Broncos punter Tom Rouen, she is both cheerful and recovering swiftly:

Amy awoke within hours of surgery acting like her typical spunky, boisterous, ebullient self and has spent the last 24 hours entertaining her family and her medical staff in the ICU. She has made at least one male nurse blush. Amy’s attitude has been overwhelmingly positive and optimistic. She has been far more of a comfort to us than we have been to her.

Van Dyken was not wearing a helmet at the time of the accident, according to the first witness to reach her–though, as she suffered no head trauma, it isn’t clear whether a helmet would have protected her.

Dr. Vikas Patel, chief of orthopedic spine surgery at the University of Colorado Hospital, told the Denver Post that the severity of Van Dyken’s injury at the T11 vertebra is potentially devastating: “The T11 is one of the vertebrae in the middle of the back, and it’s a relatively stiff and strong vertebra….There had to have been a tremendous amount of force [to sever it completely].”

In addition to her record four gold medals at the 1996 Olympics in Atlanta, Van Dyken won golds in the 4×100 medley and freestyle relays at the 2000 Summer Olympics in Sydney.