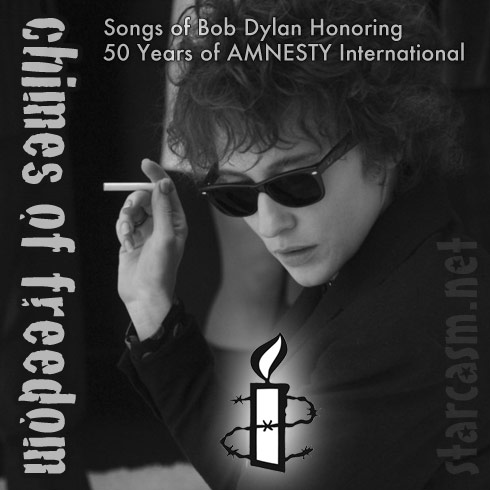 There probably isn’t a single musician in history who has garnered more tribute albums than Bob Dylan and Amnesty International has just announced they plan to honor their 50th anniversary with a potentially great addition to the “genre” with a Bob Dylan tribute to be released in early 2012. The album is titled Chimes of Freedom: Songs of Bob Dylan Honoring 50 Years of AMNESTY International and will feature a superstar lineup that includes Adele, Patti Smith, My Morning Jacket, Lucinda Williams, Sting, Rise Against, Dave Matthews Band, and… Ke$ha?!?

That’s right, the flashy, trashy, and always brashy pop star delivers a heartfelt rendition of “Don’t Think Twice,” one of Dylan’s most popular tunes originally recorded for his 1963 album The Freewheelin’ Bob Dylan.

“When you think of me, you wouldn’t think of Bob Dylan,” the pop star, whose favorite album ever is Bob’s country-flavored Nashville Skyline from 1969, tells Rolling Stone, . “My music is more about going crazy than politics. But he’s a huge influence – he writes his own music and means what he says. I write my own music and I f***ing mean every word I sing.” While recording the song Ke$ha was moved to tears. “You can hear the snot running down my face.”

Hmmmm… “Don’t Think Twice” is a masterfully sarcastic “F*** you!” song, so it seems an odd tune to get tearful over while performing. (Whenever I sing along in the shower I think about my worst ex and do a few fist pumps.) And I’m not sure how Bob would react to hearing his music is about politics – a conception he has vigorously fought against since he first broke onto the folk revival scene in the early ’60s. But, anybody appearing on a Bob Dylan tribute record gets a pass in my book, so more power to you Ke$ha! (The time$ they are a-¢hangin’, right?)

Another less surprising artist recording for the track is “People Have the Power” punk poet princess Patti Smith, who has been an avid Dylan fan for close to 300 years. For this record Patti also dips into Dylan’s 1960s era catalog and pulls the gem “Drifter’s Escape” from his harmonica and bass-driven surreal 1967 folk album John Wesley Harding. (Dylan fans probably remember Bob also returning to this gem to open a number of his NEver-Ending Tour shows from 1995 – I know I do!)

“I wanted to do something I’d never attempted,” says Patti Smith. “We had just completed our new album, and instead of drinking champagne we decided to cut the song.”

Some of the other tracks include Adele singing the most often covered song of Dylan’s “recent” catalog, “Make You Feel My Love” from 1997’s Grammy-winning Album of the Year Time Out Of Mind. I assume it is the same version as the one Adele put on her first record:

My Morning Jacket will be tackling the gut-wrenching “You’re a Big Girl Now” from 1975’s emotional atomic bomb Blood On The Tracks and Rise Up is performing “The Ballad Of Hollis Brown,” a hopelessly dark song about a farmer and his family falling on hard times from The Times They Are A-Changin’ in 1964.

“I’m kind of a born-again Bob Dylan fan, I’ll be honest,” Rise Against front man Tim McIlrath tells The Edmonton Journal. “I grew up in a punk rock/hardcore world where it wasn’t cool to listen to folk music, so I’m just now discovering a lot of amazing artists. Bob Dylan was one I passed on in the past, but now I’m digging into his catalogue and really appreciate his stuff.”

“The Ballad of Hollis Brown“

“I don’t really sing any lyric that’s not my own as intensely as I would sing my own, if that makes any sense. This song, and his words, I felt this real affinity to and this sounds like something that if I was trying to tell a story, I would write it like this, and I really got into it. It’s the first time I sang lyrics like the kind of the same way I sing my own.”

Amnesty International USA’s director of special projects Helen Garrett says, “We hope the music will inspire ordinary people everywhere to chime in on humankind’s noble quest for freedom.” (All proceeds from the sale of the album will benefit Amnesty International.) There is no official release date as of yet.

For those of you that are fans of some of the artists appearing on the tribute, but maybe not familiar with Bob Dylan, I’ve included clips from Youtube in the post. To finish things off, here are the two Bob originals mentioned above that I didn’t include:

“Make You Feel My Love” (To be covered by Adele)


UPDATE – Lucinda Williams has revealed which song she will be performing on the tribute! Actually, even better than that, she revealed what her top six choices were! Actually, Tom Overby from her management team revealed the info on Lucinda’s Facebook page:

It is done. What a monumental task. I thought Lucinda was going to implode. After two weeks of nearly non-stop Bob listening and and a constant whittling down of the list – with many great suggestions coming in from everywhere – it went from 25 to 12 and then down to about the six finalists, which kept changing also – but in the end it got down to:

Everything Is Broken
Tryin’ To Get To Heaven
It’s Alright Ma, I’m Only Bleeding
North Country Blues
Tears Of Rage
Ain’t Talkin’

And finally on the day we went to the studio it was basically down to the first two on the above list. It looked like Everything Is Broken was going to be it, but the idea was that she would run thru both of them with the band, and see if one of them clicked and that is exactly what happened except the first one they tried really started to really come together fast so the second one never got a chance.

And the winner is….

Tryin’ To Get To Heaven

Thanks for all the great suggestions – it was very interesting to see what came up and there many songs that we had overlooked and ended up in the last 10-15.

Here’s the original “Trying to Get to Heaven” – another selection from Bob’s 1997 release (and my selection for best album of the decade), Time Out Of Mind:

Update 2 – According to the Expecting Rain forum there will also be a track from Bad Religion on the album.