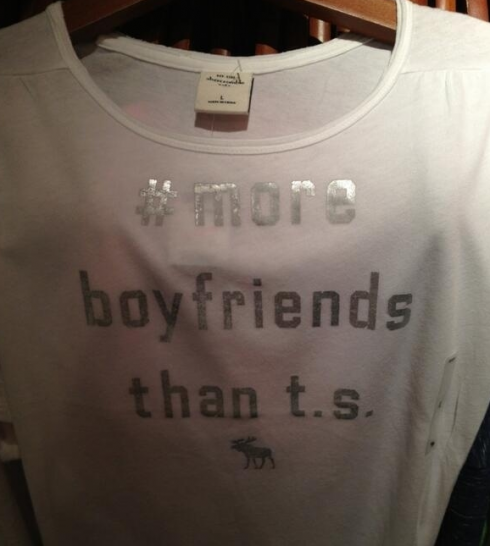 Taylor Swift fans so were outraged by an Abercrombie & Fitch t-shirt that pokes fun at the chanteuse’s dating history that they started a successful petition via change.org to get the shirt discontinued.

The t-shirt in question has “# more boyfriends than t.s.” written on it in silver lettering.

According to Gossip Cop, if you call the A & F customer service line, you get this automated message. “Thank you for calling Abercrombie & Fitch public relations. If you are calling regarding the Taylor Swift t-shirt, please note this is no longer available.” The company also tweeted “Hey #swifties we no longer sell the tshirt. We <3 Taylor’s music and think she’s awesome!” Abercrombie & Fitch hasn't had a great year. They are under fire for not selling plus-sized clothing, with the CEO himself going on record saying that they only want “attractive” customers.

But that notwithstanding, what do you think of their Taylor Swift joke? Was it in good humor, or over-the-top bullying?