Madonna and current husband Guy Ritchie are reportedly getting closer to a divorce settlement as rumors swirl about the singer’s involvement with Yankees third baseman, and recent divorcee, Alex Rodriguez. As is often the case with divorces, allegations are starting to come out, including Madonna’s claim that Ritchie’s verbal abusiveness made her feel “worthless, unattractive, unfeminine, insecure, and isolated.” The verbal abuse included Ritchie stating that she was “past it” after turning 50 and looked like a “granny” onstage. Since Madonna has seemingly found happiness with A-Rod, we are assuming that one of his positive qualities is an unwillingness to be honest with her. 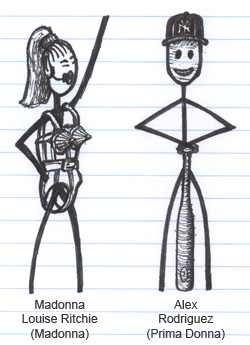 The superstar couple has been spotted about town and now the Daily Mail is reporting that A-Rod is purchasing property two blocks from Madonna and speculates a public confirmation of the Yankee panky soon. We’re sure Madonna’s three children are very excited at the prospect of once again having a parent that can make hits. We here at starcasm.net are very excited about 2009 spring training when we get to see A’s rod and Kabballs protected by his stylish new Madonna cone athletic supporter!