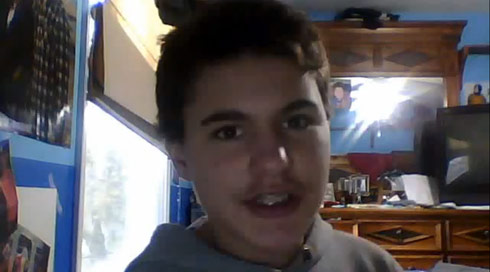 The “It Gets Better” video campaign has been one of the most enlightening and hopeful things to become a viral internet sensation that I can personally recall. Tragically, 14-year-old Jamey Rodemeyer of Williamsville, NY, who posted his own “It Gets Better” video message back on May 4th, took his own life Sunday.

His parents firmly believe that years of relentless bullying directly drove their son to suicide. They found their son at home dead after returning from a camping trip.

Here is Jamey’s video followed by a full transcript:

Hi, this is Jamey from Buffalo, New York and I’m just here to tell you that it does get better. Here’s a little bit of my story. December 2010 I thought I was bi(sexual) and then I always got made fun of because I virtually have no guy friends and I only have friends that are girls and it bothered me because they would be like fag*ot that and they caught me in the hallways and I felt like I could never escape it. And I made a Formspring, which I shouldn’t have done, and people would just constantly send me hate telling me that gay people would go to hell.

And I just want to tell you that it does get better because when I came out for being bi I got so much support from my friends and it made me feel so secure. If your friends and family isn’t even there for you I look up to one of the most supporting people of the gay community that I know, Lady Gaga. She makes me so happy and she lets me know that I was born this way and that’s my advice to you from her. You were born this way, now all you have to do is hold your head up and you’ll go far because that’s all you have to do is just love yourself and you’re set. I promise you it will get better.

Jamey’s mother Tracy said, “So he hung around with the girls a lot, so then the teasing started happening like, ‘Oh you’re such a girl or you’re gay or whatever’ and that bothered him for many years.”

Now, Jamey’s family wants to continue with their son’s message. Jamey’s father Tim stated, “To the kids who are bullying they have to realize that words are very powerful and what you think is just fun and games isn’t to some people, and you are destroying a lot of lives.”

I wish I could have known you Jamey. I know how it feels to have a song and a musical hero help you identify yourself at that age too. When I felt like no one around me understood who I was my idol, Bruce Springsteen, told me to ‘let the broken heart stand as the price you’ve got to pay.’ It’s a message I carry in my soul to this day. So this one’s for you and your family:

I firmly believe that the “It Gets Better” campaign has saved many young lives, I’m just heartbroken that Jamey saw no other way out from the bullying he suffered.